Here’s a plot of SARS-CoV-2 “viral load” over the course of an infection, where “viral load” is measured by PCR. At the start of infection the number of viral RNA copies is close to zero, but it quickly and exponentially shoots up to about a billion cp/mL before dropping back down again.

Figure 1. Viral load over time for a typical infection, as measured by PCR in RNA copies/mL (Kissler, 2021). Y-axis is in log units.

A question that everyone asks is: When are you infectious? It would be extremely useful if RNA count could be converted into a probability of infecting others. If we knew that relationship, we would better understand when it’s safe for infected people to return to school or work.

Many people have an intuition that infectiousness is proportional to the logarithm of the RNA count (Figure 2). Under this view, someone at 10\(^8\) cp/mL is twice as infectious as someone at 10\(^4\) cp/mL. If this view is true, people should arguably not return to school or work until all of the viral RNA has left their body.

Other people have the intuition that infectiousness is directly proportional or “linearly” related to RNA count (Figure 3). Under this view, someone at 10\(^8\) cp/mL is 10,000 times more infectious than someone at 10\(^4\) cp/mL. If this view is true, people should return to school when their RNA count dips below 10\(^5\) cp/mL or even 10\(^6\) cp/mL, which is typically around the point that antigen tests stop being positive.

So who’s right? To find out, let’s turn to some quantitative models of transmission via aerosols. Not to spoil the fun, but we’ll learn that:

The aerosol box model of transmission (Buonanno, 2020; Peng, 2022) is, as far as I can tell, the standard model of transmission in the literature. Essentially a survival analysis model, it describes how virus in the respiratory tract is exhaled into the air before getting partially ventilated, filtered, and decayed. Once in the air, the virus is inhaled into another person’s respiratory tract and probabilistically causes an infection. Take a couple minutes to look at this figure and pay attention to the colors, as I use them consistently in my graphs. 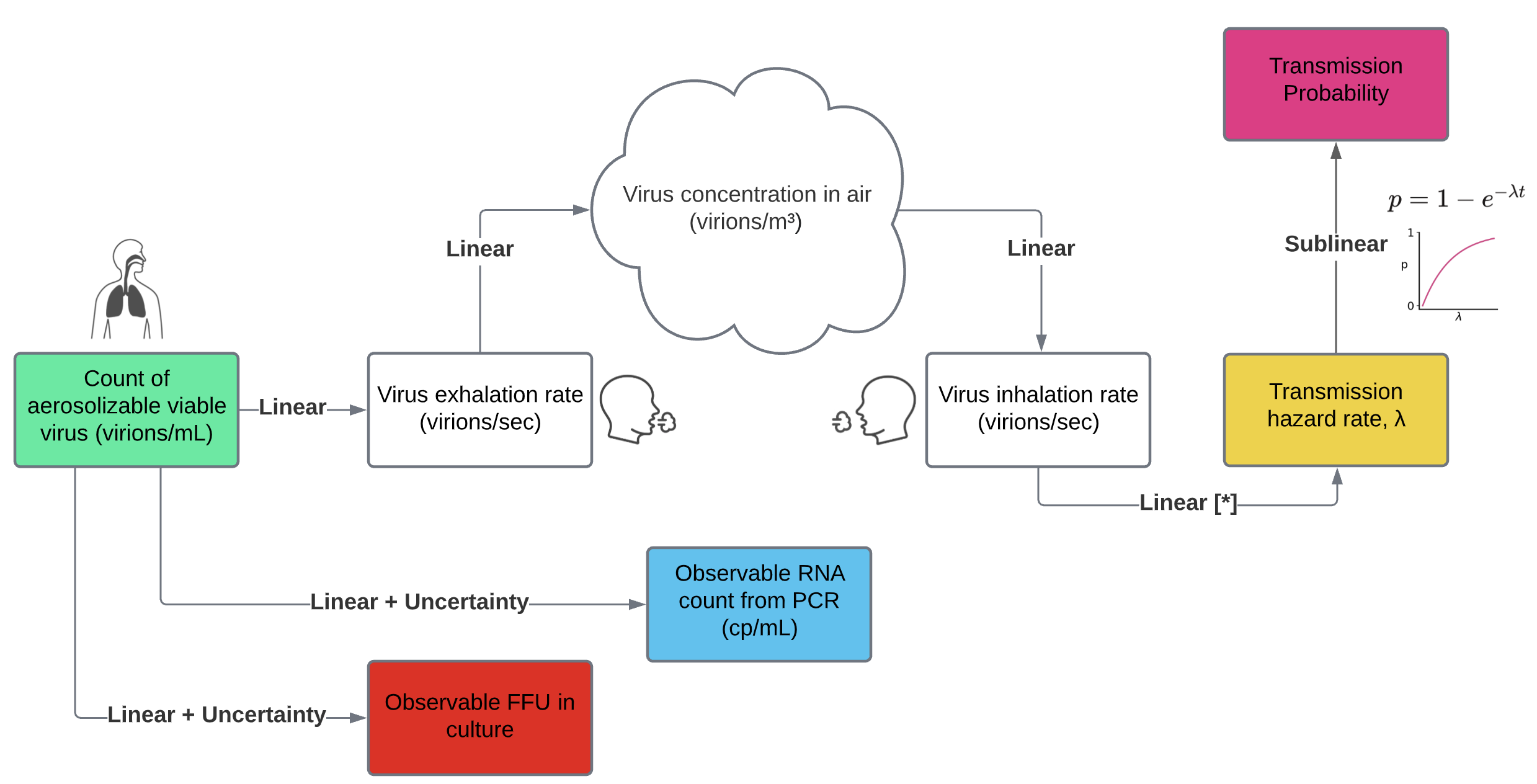 Figure 4. The aerosol box model of transmission, with some extensions for measurement uncertainty.

Each step in the model is a linear function of the count of aerolizable virus inside the infected person. More precisely, the output of each step is proportional to the input viral count. If you reflect on each step, linearity is the most plausible option.

If we accept the linearity of each step above, then infectiousness, which is captured by the hazard rate, is proportional to the amount of aerosolizable virus in the infected person.

To demonstrate the linear effect, I reproduced the box model of Buonanno (2020) and Peng (2022) and extended it by inputting the viral load curves measured by Kissler (2021). I assumed that two people talk with each other for one hour in a 100 m\(^3\) room with ventilation levels similar to an office. One person is infectious and the other is not. As you can see in the plot below, the relationship between virus count and infectiousness is linear.

Figure 5. Simulations based on the aerosol box model of transmission (Buonanno, 2020; Peng, 2022) demonstrate how infectiousness is proportional to virus count.

Figure 6. I am only showing this horribly rasterized image because the data is so good. Cultured virus count is proportional to RNA count. Data is averaged over 36 volunteers. Individual curves can be viewed here.

But uncertainty in the relationship weakens the linearity to infectiousness

While the relationship between RNA count and infectious aerosolizable virus is mostly proportional, there are a couple ways the relationship could break down. First, PCR measurement of RNA can be unreliable. In particular, inter-test reliability has a standard deviation of about 0.75 logs (Figure 1A of Arnaout, 2020, assuming 3 Cts per log). Second, there may be differences in virus count between the parts of the respiratory tract that are swabbed and those that produce aerosols. In particular, as the plot above shows, there may be differences in timing between the nose and the throat.

To capture this uncertainty, I ran some Monte Carlo simulations. Following Sender (2021), I used a starting assumption of a 1:1 RNA:virus ratio, although the exact value of the ratio is arbitrary and not essential (see notebook). I then randomly perturbed the virus count curve with a vertical standard deviation of 0.75 logs and horizontal standard deviation of 0.75 days.

On each iteration, I computed the probability of transmission at each point of the time series, and then averaged all the curves. 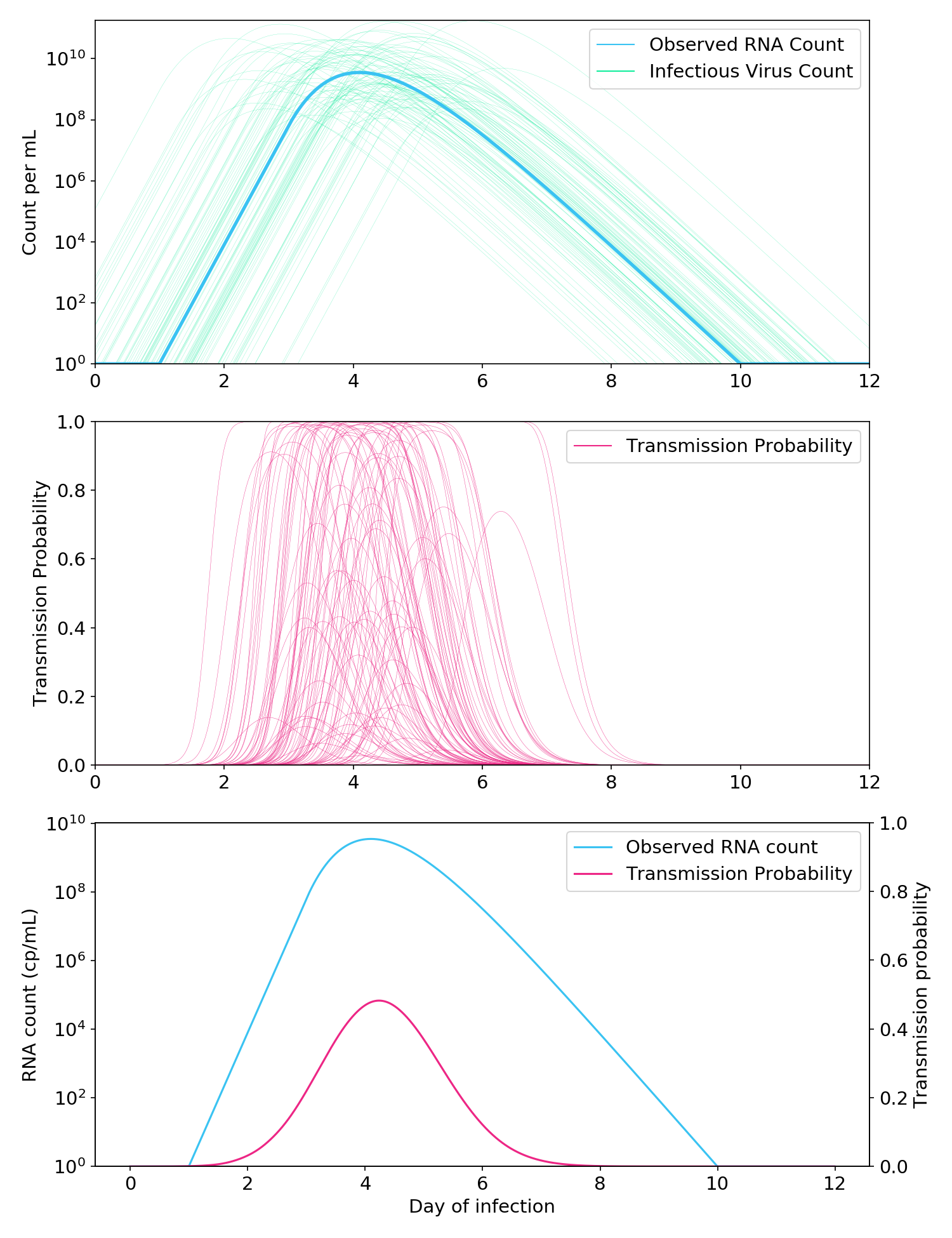 As expected, the addition of uncertainty made the relationship between observed RNA count and infectiousness less linear (Figure 7, bottom). Nevertheless, it was still far more linear than a full logarithmic relationship, and the probability of transmission when the RNA count was greater than 10\(^5\) cp/mL remained very low.

After I published this post, somebody sent me Ke (2021), which claims that the logarithmic model is an appropriate surrogate for infectiousness. It’s an important paper with useful models, but as I detail in a followup post, their models aren’t logarithmic! Like my noise model, the models are intermediate between logarithmic and linear and, if anything, are closer to linear.