A special thanks to Scott Cunningham and Dean Eckles for helping me clear up my own confusion and inspiring me to write this blog post, and to Scott for his excellent book, which taught me a lot of background for this.

You would like to report the answer to a very basic question: How much did the treatment help the people who got treated? You might think that’s a simple question to answer. But you’d be wrong. 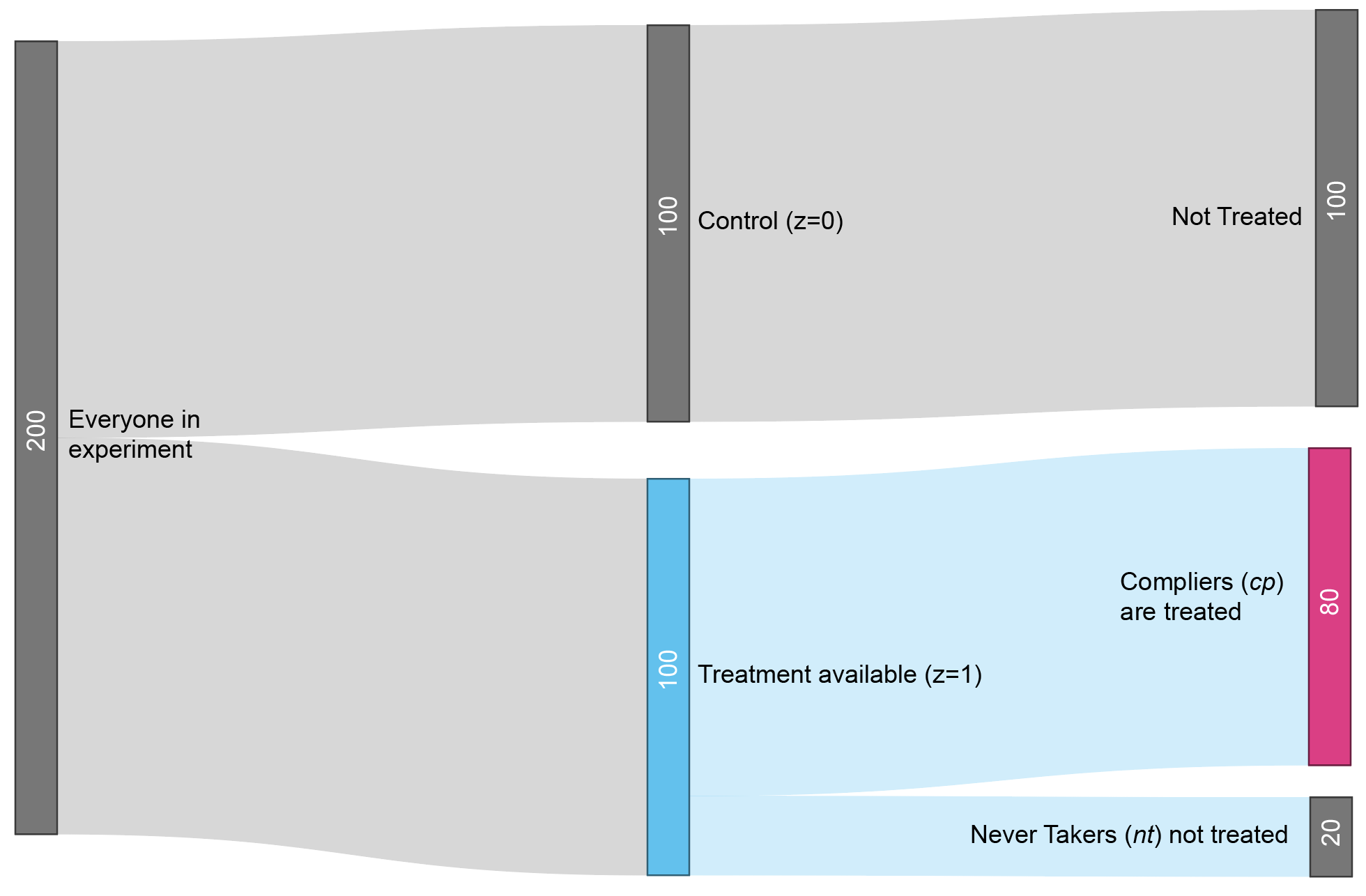 Before getting started, I know many readers might wish to suggest a different question: What was the impact of making the treatment available, regardless of whether the eligible users got treated? That’s an important question that we’ll get to later. For now, let’s focus on the impact to those who actually got treated. There’s a few ways you might think this could be answered, but most of them are wrong.

This approach has a bad selection bias problem. Compliers may comply because they have poorer health to begin with. Suppose the average health score in the overall population is \(Y=50\), and that compliers start out with score of \(Y_{cp,z=1} = 40\). Even even if the treatment improves the health of the compliers by, say, \(4\) points, they will still end up with lower health (\(44\)) than the control group. This analysis could make a useful treatment look like it was harming people’s health! 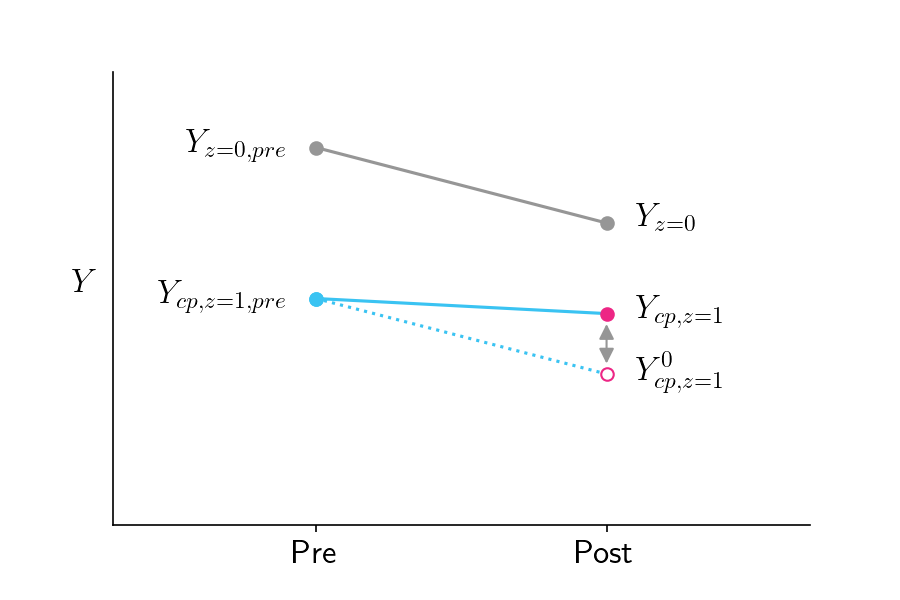 DD attempts to estimate \(Y_{cp, z=1}^0\) by assuming the treated compliers would have had the same slope as the control group, in the counterfactual world where they didn’t get treated. But that’s not a safe assumption! It is completely conceivable that the compliers, were they not treated, would have a different slope than the control group. 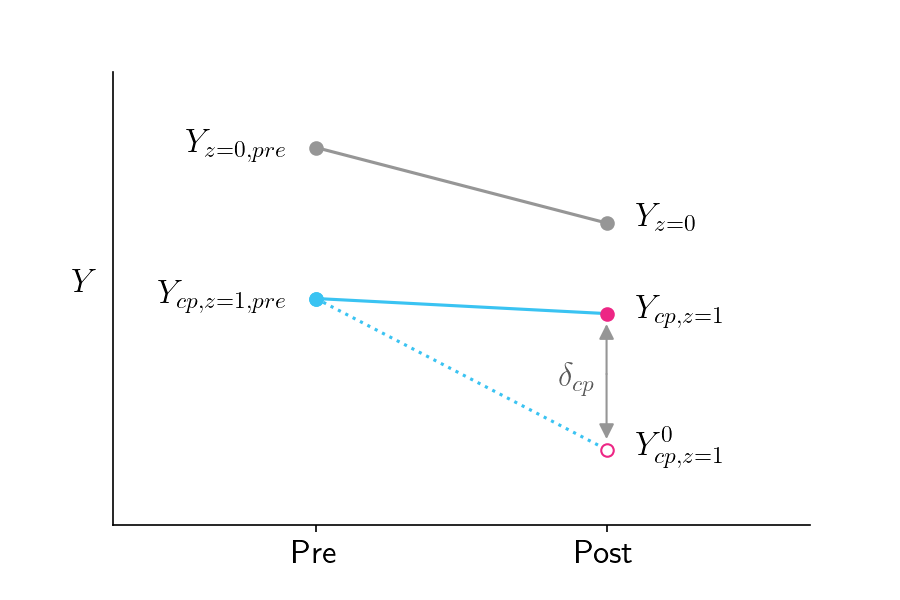 Figure 3: Similar to Figure 2 except that the counterfactual outcome in the bottom right is lower than in Figure 2, which assumed parallel slopes to the control group.

DD is a reasonable approach in situations where there is no randomization. But because our experiment is randomized, there is a clever trick we can use to get a much better estimate.

The parameter we ultimately want to estimate is \(\delta_{cp}\), which is the difference between the treated compliers’ outcome and their counterfactual outcome if they didn’t receive treatment, as shown in Figure 3.

This value is called the Local Average Treatment Effect (LATE), since it reflects the impact of the treatment on a particular subpopulation.

Remarkably, there is a great way to estimate \(Y_{cp, z=1}^0\) without relying on the flawed assumptions of DD! Here’s the trick, which is based on the the logic of instrumental variables: Because of randomization, we should expect the control group’s outcomes to be the same as the treatment-available group’s outcomes in the counterfactual world where no one got treated.

The treatment-available group is composed of two subgroups, compliers (cp) and never-takers (nt). \(Y_{z=1}^0\) is therefore a weighted average of these two groups, which we can substitute into the formula above

This is a remarkably simple formula. The impact on treated compliers is just the difference between the treatment group and control group, divided by the fraction of compliers. Even more remarkable is that this formula was only discovered recently. Not only is the question “How much did the treatment affect the people who took it” deceptively difficult, its solution is simple.

To help us summarize this, let’s hand it over to Drake.

Figure 4: Summary of methods for estimating the LATE in a randomized experiment with partial compliance.

Complier biases that LATE does and does not account for

The LATE tells you how much the treatment affects the people who actually got treated. This group of people is biased in two ways, and LATE only accounts for one of these biases. The first bias is that this group’s counterfactual outcomes might be different from other groups. LATE accounts for that by correctly reporting the impact of the treatment relative to the counterfactual. The second bias is that the treatment might be more effective in the complier group than in the never-taker group. That bias is unescapable and is known as a heterogenous treatment effect. The way to deal with this bias is to acknowledge it transparently.

LATE and Intention To Treat

The fact that the treatment may have a different effect in the treated compliers is one limitation of LATE. But there are a couple other limitations as well. One is that LATE doesn’t tell you about the overall impact of your policy. If only 10% of people in the treatment group actually choose to take the treatment, the overall impact of your policy might be small, and you might want to consider treatments with higher uptake. The other limitation is that in many medical applications, the treatment involves more than a single dose, and people can withdraw midway through the program. This means that the distinction between complier and never-taker can be strongly driven by the effectiveness of the treatment, making the LATE a less generalizable metric. For these reasons, researchers often report the Intention To Treat (ITT) metric, which is the impact of being assigned to treatment (\(Y_{z=1} - Y_{z=0})\) rather than the impact of being treated. While suffering from its own limitations, ITT should always be reported, often as the headline metric. Nevertheless, for many applications, particularly those involving one-time enrollments, the LATE is a critical and complementary metric, and one that’s trickier than I ever imagined.