Hyperbolic discounting — The irrational behavior that might be rational after all

If I offered you $50 now or $100 in 6 months, which would you pick? It’s not crazy to choose the $50 now. One reason is that it’s a safer bet. If you had chosen the delayed $100, there’s a risk that I might forget about the deal when the time came to pay [personal note: I wouldn’t], and you would never get your money. Another reason is that if you invest the $50 now, you might be able to make up some of the remainder in interest.

Valuing immediate money more than future money is a rational behavior known as discounting. Everybody has their own discount factor. Some people might value money in 6 months at, say, 75% of what they’d value it today. Others might value it at 90%.

In the early 1980s, psychologist George Ainslie discovered something peculiar. He found that while a lot of people would prefer $50 immediately rather than $100 in 6 months, they would not prefer $50 in 3 months rather than $100 in 9 months. These two different scenarios are shown in the diagram below, where the green checks indicate the options that people tended to choose. 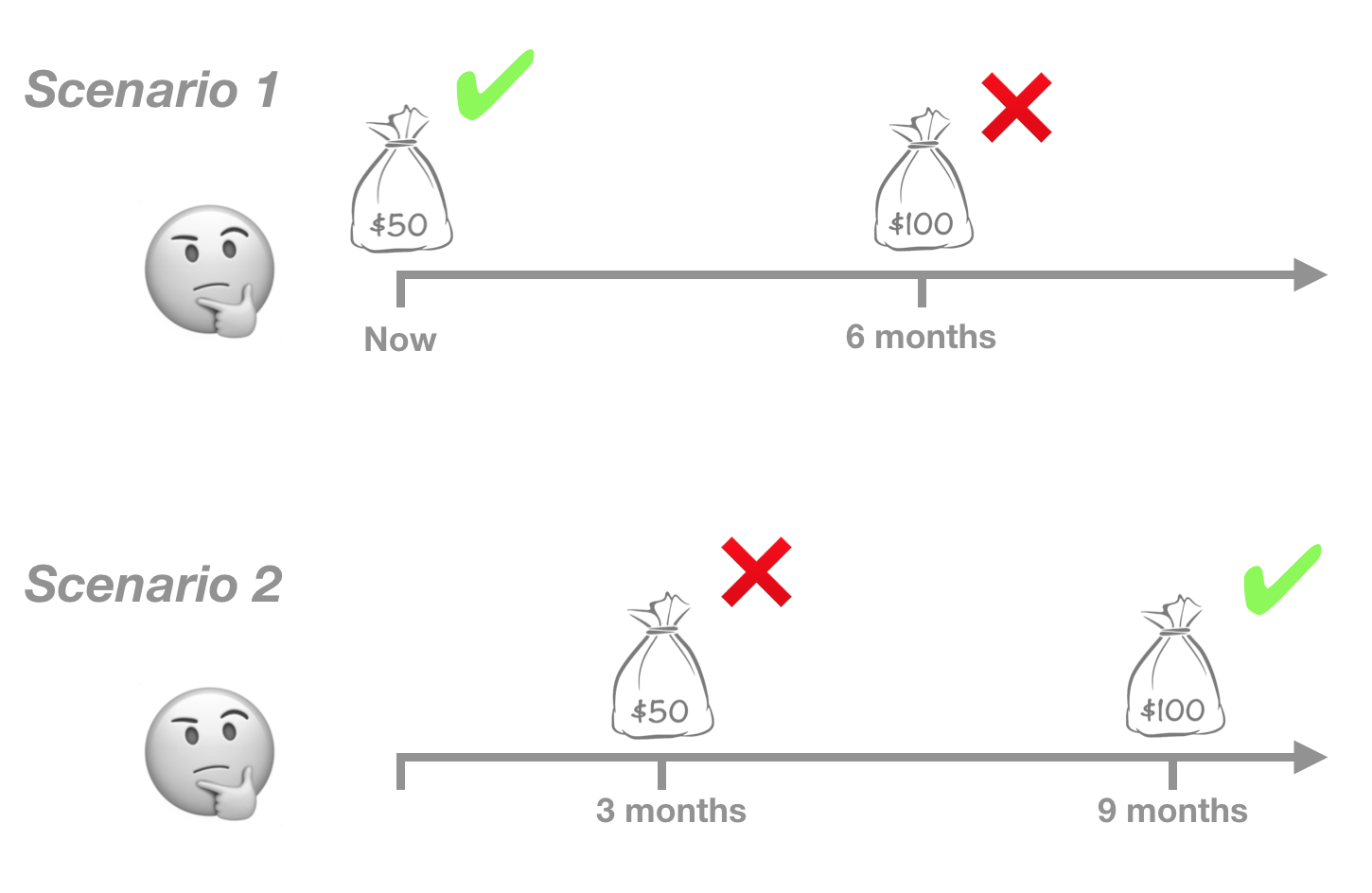 The usual way to achieve rational time-consistent discounting is with an exponential discount curve, where the value of receiving something at future time \(t\) is a fixed fraction \(s(t)\) of its present value, and where \(\lambda\) is the constant discount rate. 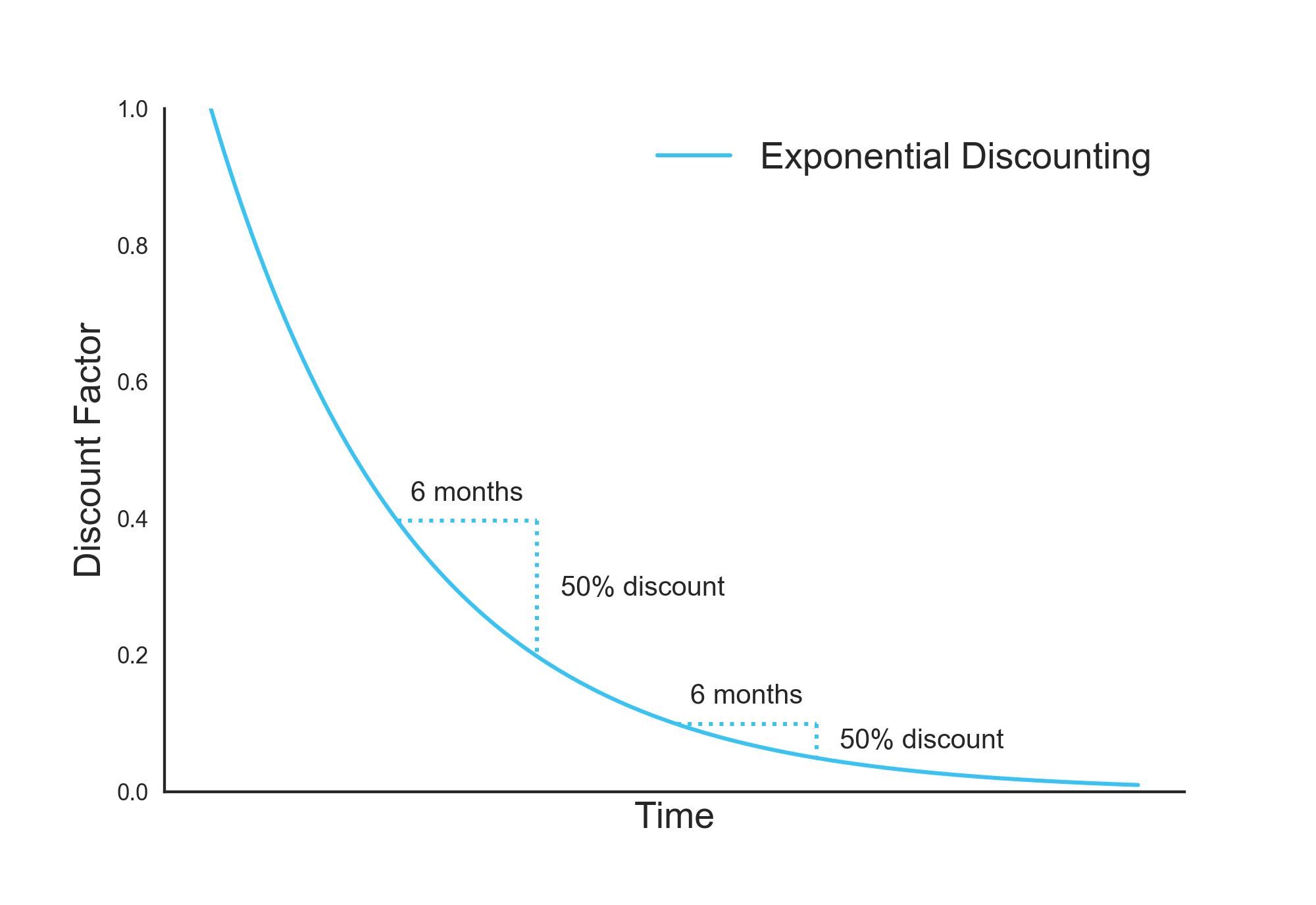 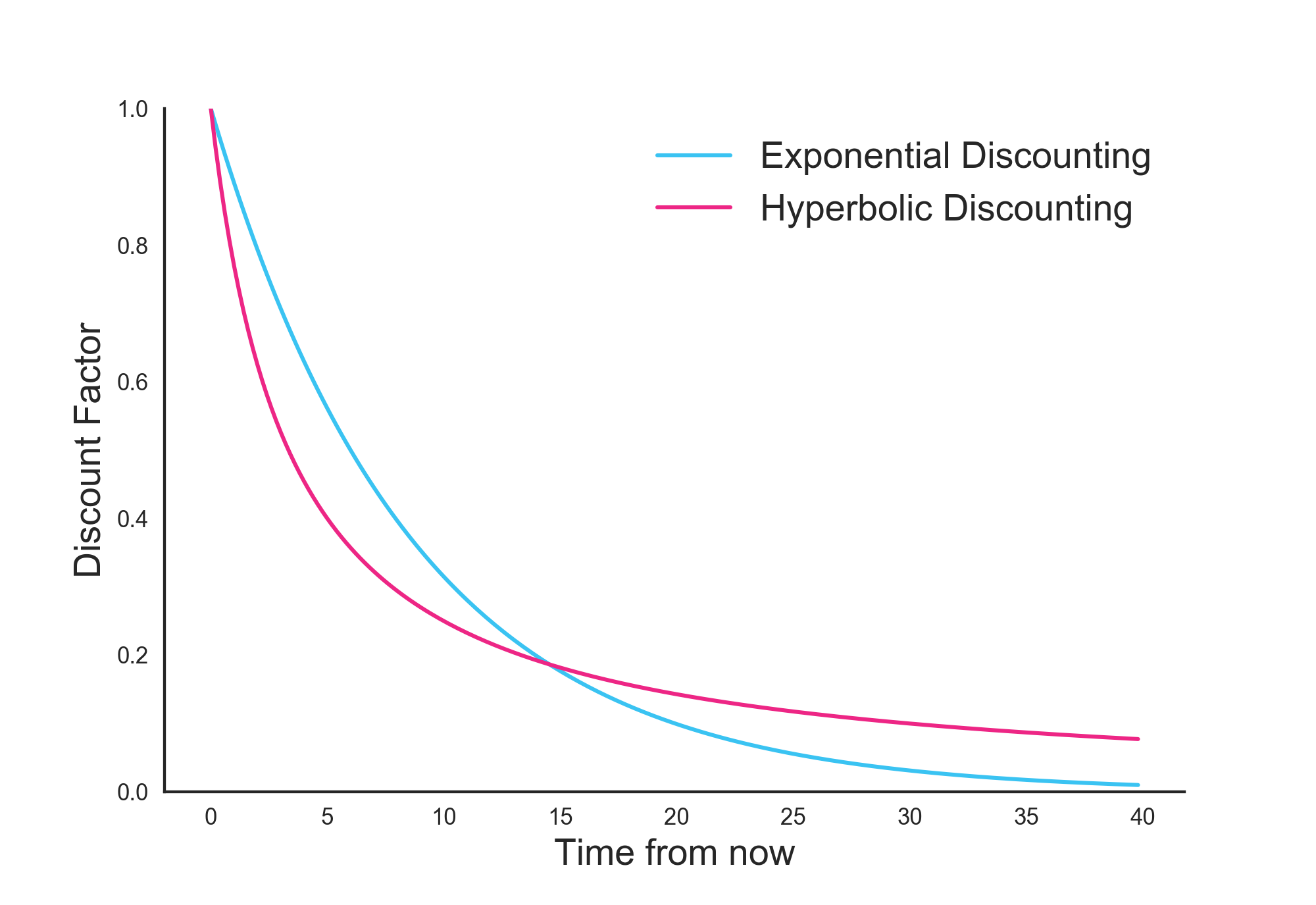 According to the hazard-based interpretation of discounting, you should prefer immediate money to future money because there is a risk that the future money will never be delivered. This interpretation is more common in the animal behavior literature. (Pigeons, rats, and monkeys all show hyperbolic discounting.)

Imagine that there could be an event at some time that could cause you to no longer receive your reward. Perhaps the person who owes you the money could die or lose their assets. Assuming a constant hazard rate (i.e. assuming the event is equally likely to happen at any time), the probability that the event has not happened by time \(\tau\) is:

The \(s(\tau)\) function is called a “survival” function because it describes the probability that the deal is still “alive” by time \(\tau\). The \(\lambda\) parameter is the constant hazard rate. 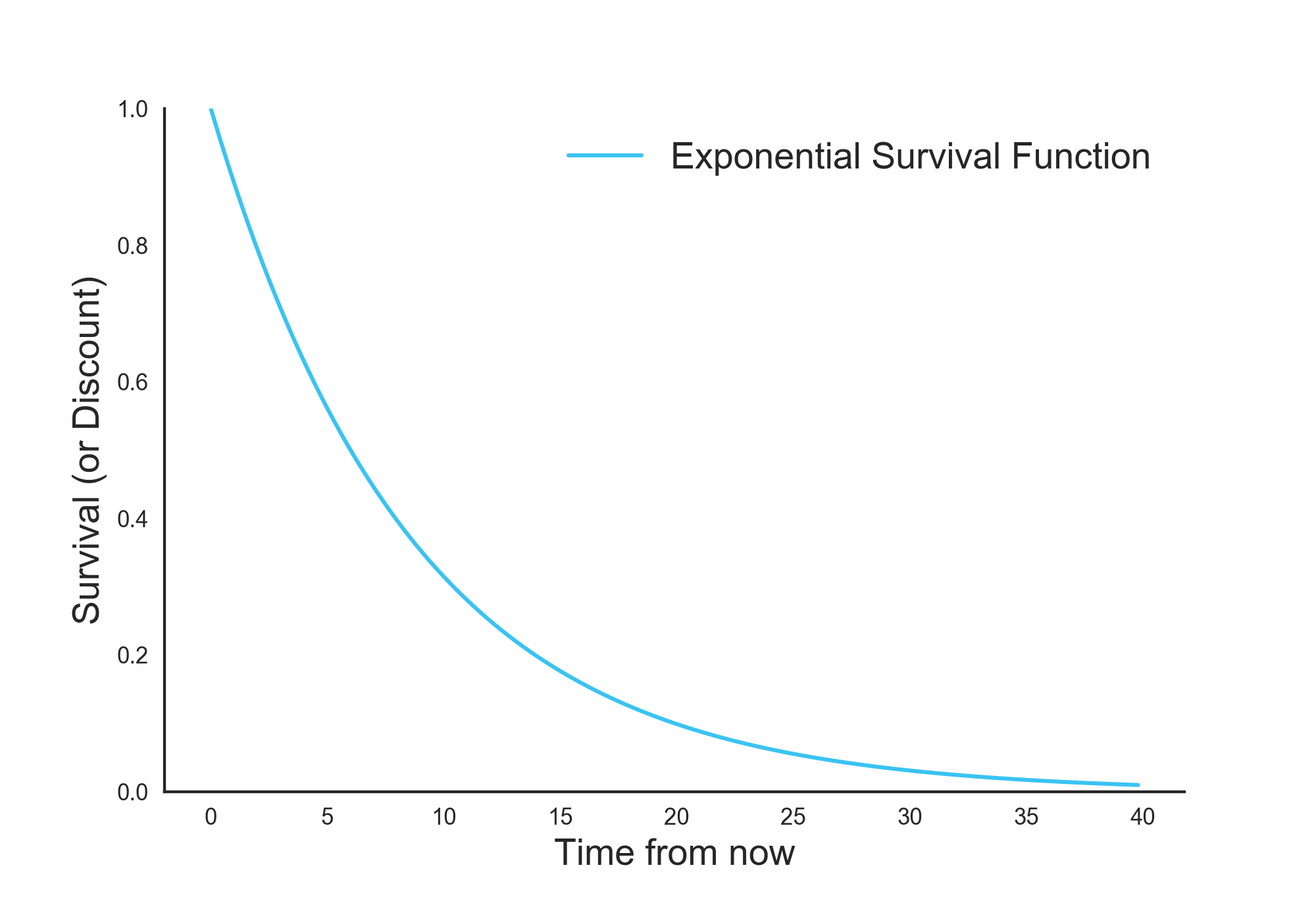 The exponential prior is shown in the graph below. Although this curve looks like a discount function, it is not. It is a distribution over a parameter. 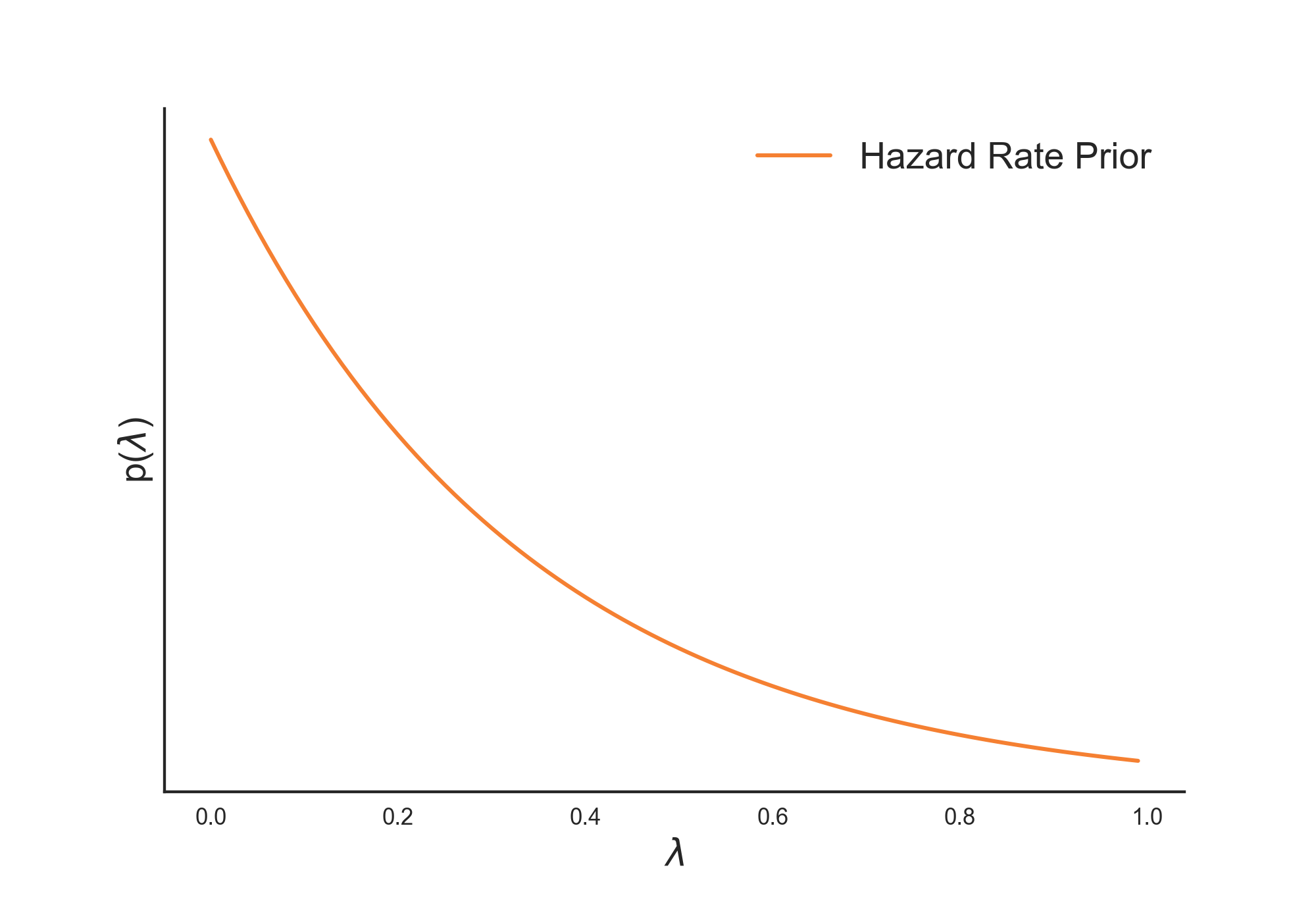 In the plot below, I’ve drawn 30 exponential survival functions in blue, each with a \(\lambda\) sampled from the \(p(\lambda)\) prior distribution defined above. The pink curve is the mean of all of them. Notice that whereas the individual survival curves are all exponential, their mean is hyperbolic, with a distant future characterized by a flat slope and relatively high survival values. 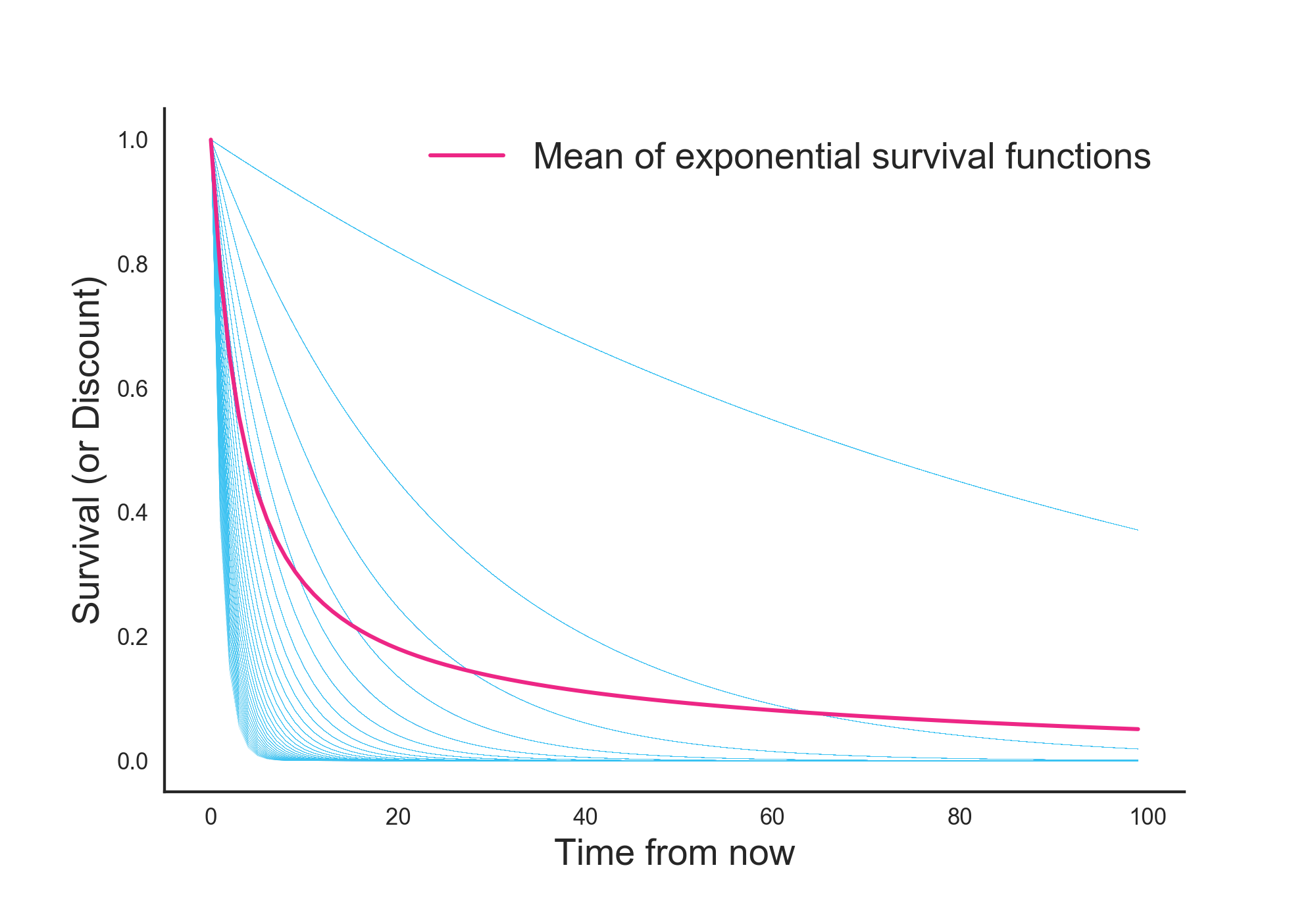 For a more qualitative intuition, you can think of it this way: When you make a deal with someone, you don’t know what the hazard rate is going to be. But if the deal is still alive after 80 months, then your hazard rate is probably favorable and thus the deal is likely to still be alive after 100 months. You can therefore have a light discount rate between 80 months and 100 months.

While hazard functions are one way to explain discounting, another common explanation involves interest rates. A dollar now is worth more than a dollar in a year, because if you take the dollar now and invest it, it will worth more in a year.

If the interest rate is 5%, you should be indifferent between $100 today and $105 in a year, since you could just invest the $100 today and get the same amount in a year. If the interest rate is constant, the value of the dollar will rise exponentially, according to \(v(\tau) = e^{0.05\tau}\), where \(v\) is the value. To rationally maintain indifference between a dollar and its equivalent value in the future after investment, your discount function should decay exponentially, according to \(s(\tau) = e^{-0.05\tau}\).

Before taking on the fluctuating interest rate scenario, let’s first take on a different assumption that is still somewhat simplified. Let’s assume that the interest rate is constant but we don’t know what it is, just as we didn’t know what the hazard rate was in the previous interpretation. With this assumption, the justification for hyperbolic discounting becomes similar to the explanation in the blue and pink plots above. When you do a probability-weighted average over these decaying exponential curves, you get a hyperbolic function.

When interpreting discounting as a survival function, a hyperbolic discounting function is rational if you introduce uncertainty into the hazard parameter via an exponential prior (Souza, 2015). When interpreting the discount rate as an interest rate, a hyperbolic discounting function is asymptotically rational if you introduce uncertainty in the interest rate via a geometric random walk (Farmer and Geanakoplos, 2009).